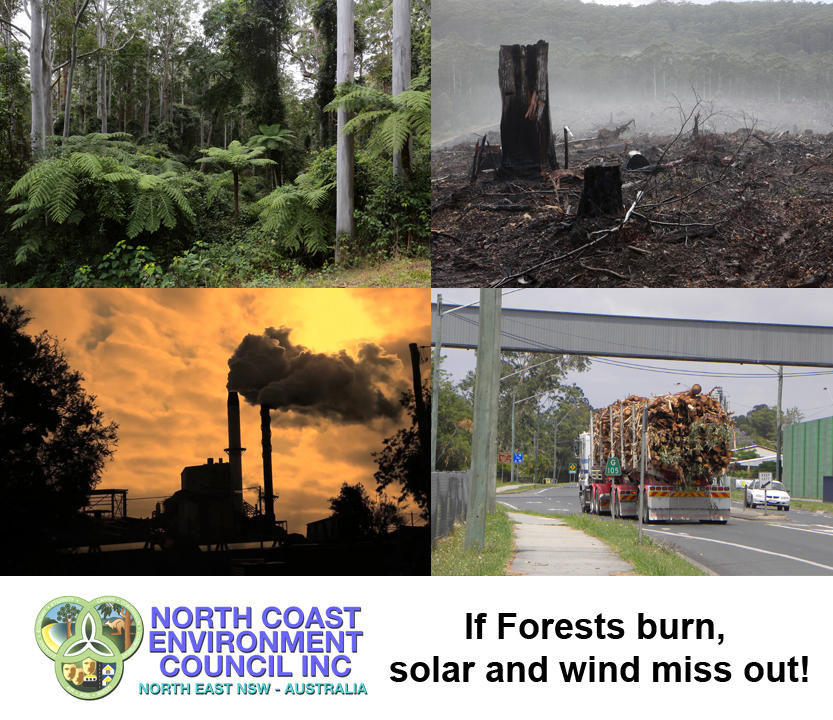 “We know from nearly 50 years experience of woodchipping, that the logging industry views everything except A Grade sawlogs as 'waste'. So the likelihood of intensive damaging logging has just got worse.

“The renewable industry didn't want this. They know that not only will it damage their brand, but that it steals from the limited funds available to kickstart renewable energy projects, as well as cheating and effectively lowering the Renewable Energy Target: as energy created from this dirty, high emission and unsustainable source will be counted in our fight to decrease greenhouse gas pollution.

“It's a retrograde step, that other countries are already distancing themselves from.

“Likewise consumers will be reluctant to pay more for renewable energy if they have a reasonable suspicion that it is koala homes that are going up in smoke”, Ms Russell said.

Dailan Pugh of the North East Forest Alliance is concerned that burning trees that have been storing carbon for decades, will result in high CO2 emissions as well as damage to biodiversity, soils and water catchments. “Burning trees is not carbon neutral,” he said.

“The best thing we can do to ameliorate climate change is to leave our recovering forests alone so that they can take-up and store ever increasing volumes of carbon as they mature. This would make a real difference to climate change.

“Feeding trees into furnaces for power is just as polluting and environmentally damaging as coal. This needs to be clearly ruled out as a substitute for genuinely renewable power such as solar and wind.

“We call upon federal representatives from the north and central coasts to ensure the woodchipping industry does not return with a vengeance by expressly excluding electricity generated by burning trees from native forests as eligible for Renewable Energy Certificates,” Mr. Pugh said.